A great article on our Gold Coast Biggest Tree Planting Day 2017 by seniorsnews.com.au.

The loss of native Australian bush on the Gold Coast verges on a tragedy but, on a brighter note, many opportunities are offered for volunteers to be involved in bush restoration work. Gold Coast Catchment Association president Wal Mayr says much of the coast and hinterland was cleared or disturbed over the last 150 years by timber-felling and agriculture. 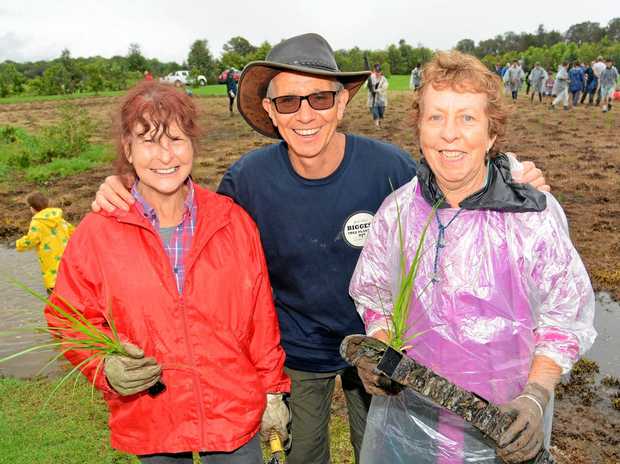 “Both of these industries are virtually dead on the coast now – and unfortunately foreign plants tend to colonise the disturbed land they have left much quicker than the endemic Australian species.

“This is now being exacerbated by urban sprawl and garden escapees that become weeds. So much of what we assume is Aussie bush is actually weedscapes from other countries.

“These weedscapes can be massive, taking over whole trees and completely dominating the landscape.

“They offer limited food and habitat for native animals and do little to protect our waterways as they are shallow-rooted, and collapse in on themselves and give little shade over the water of creeks and rivers.”

On the positive side, Wal praises the City of Gold Coast, and organisations like Healthy Land and Water and the GCCA which offer opportunities to learn about natural systems and actually do some hands-on work to fix the problems. GCCA recently organised The Gold Coast Biggest Tree Planting Day (on October 21) beside Mudgeeraba Creek at Robina where 10,000 native endemic plants were put in the ground. Wal and Heather Mayr, long-time members of Land for Wildlife and Voluntary Conservation Agreement schemes, took out the city’s 2016 Australia Day Environment Award. They have spent the last 25 years restoring their property, Blue Fig Creek Nature Refuge, which adjoins Springbrook National Park and the Austinville Conservation Area.

“We would love more people to get involved in Landcare, Bushcare and Beachcare,” Wal said.

“Any age or fitness level is fine. People serving the tea at smoko are highly valued, as are people who want to plant or get involved in weeding or other more vigorous activities.

“It’s social and inclusive and we all have a laugh.

“A program that GCCA runs is Platypus Watch. This involves regular surveys of each of the major Gold Coast’s creeks and rivers.

“We have up to 10 pairs of people spread across a particular waterway and survey the activity of platypus for two hours around dawn.

“We then get together and collate the results. The only skill required for this is the ability to get up early!”

Wal is passionate about bush restoration work and believes the associated learning is critically important.

“When someone gets involved and becomes aware of the issues, they can help influence government to direct its resources to helping fix the problem,” he said.

“Secondly, they can use new skills to actually do on-ground work. There are more than 40 Landcare, Bushcare and Beachcare groups on the coast that tend to have planting and weeding days once a month.

“They are a great social way of getting involved and doing some hands-on work.”

Read the whole article by following this link : https://www.seniorsnews.com.au/news/local-volunteers-doing-their-bit-to-restore-austra/3256278/