Which Turtles live in our waters?

Queensland has a significant population of sea turtles and they are often spotted cruising in the Gold Coast Seaway, throughout the Broadwater, off the beaches on our rocky reefs and further up into the Moreton Bay Marine Park. If you are interested in learning more about how to identify different turtles we will explore this more fully in our face-to-face workshops.

Turtle species known to commonly occupy the waters surrounding the GC include:

Green turtles are found in tropical, subtropical and temperate oceans around the world and usually live among coral, rocky reefs and seagrass meadows of coasts and islands. While seagrass meadows are a primary food source for green turtles, the species’ feeding habits can vary regionally and may include marine algae as the primary diet. The turtles get their name from the green coloured fat under its shell. Adult green turtles weigh on average 150 kilograms. The carapace (shell) grows up to one metre long, and has four scales along each side. The carapace is olive-green in colour and can be variegated with brown, reddish-brown and black. The plastron (underside) is a whitish-cream colour. 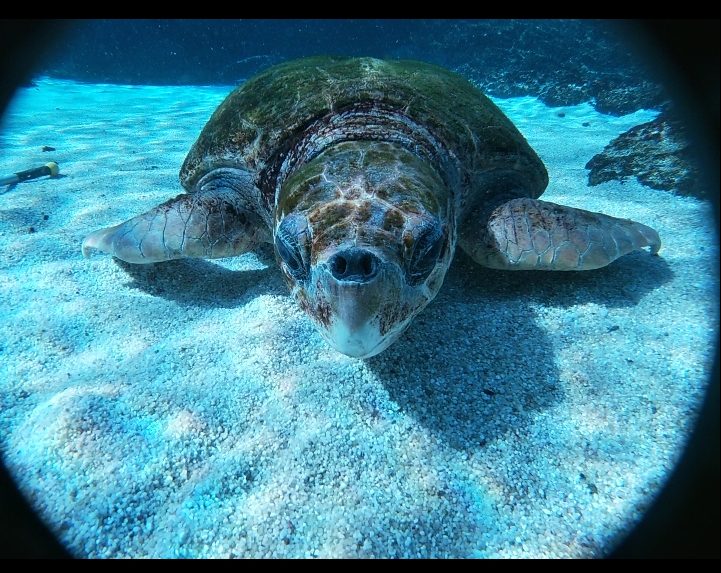 Loggerhead turtles are named after their relatively large-sized head with strong heavy jaws. These turtles are found in tropical and subtropical oceans worldwide and live among coral and rocky reefs and seagrass meadows of coasts and islands as well as deeper soft-bottomed habitats. The average weight of an adult Loggerhead Turtle is 100-150 kilograms. The carapace grows to approximately one metre long and has five scales along each side. It is dark reddish brown in colour with darker brown markings. The plastron is creamy-yellow.

Hawksbills are distinguished by their hooked hawk-like beak and charismatic shell pattern of overlapping scales that forms a serrated look at the edge of the carapace. These turtles are predominantly found in coral or rocky reefs. They feed mainly on sponges by using their narrow pointed beaks to extract them from crevices in the reef, but they also feed on seagrasses, algae, soft corals and shellfish. Hawksbills are smaller than other sea turtles with adults growing to around 71-89cm long and weighing approximately 46-70kg.

The following turtles are also known to visit our shores but are not as commonly sighted:

The Flatback turtle nests exclusively in Australia and is endemic to coastal waters off the Australian continental shelf. It is identified by its flat shell with upturned edges. Flatback turtles prefer shallow, soft-bottomed seabed habitats away from reefs. The flatback turtle is carnivorous, feeding mostly on soft bodied prey such as sea cucumbers, soft corals and jellyfish. They feed mainly in subtidal, soft-bottomed habitats. The carapace is olive-grey fringed with a pale brown-yellow colour and has large non-overlapping scutes. On average adult carapace are 90cm long and weigh approximately 90kg. Their hatchlings are larger than most other sea turtle species.

The Olive Ridley is the smallest of the marine turtles growing to around 45kg in weight and approx. 70cm in length. They are identified by their round, heart-shaped carapace which is usually of a grey-olive colour, with 6 or more scales on each side of the shell. They are found in shallow, soft bottomed, protected waters around the top end of Australia from South QLD around to the Joseph Bonaparte Gulf in WA. They are carnivorous and their diet consists predominantly of shellfish.

Leatherbacks are the largest of all of the species of sea turtles, they can grow over 2m in length and weigh over 700kg! They are one of the most widely dispersed sea turtles and are also the most migratory, sometimes crossing entire oceans between foraging areas and nesting beaches. They are normally found in the pelagic zone and primarily feed on sea jellies. Known nesting sites in Australia are in Wreck rock and the adjacent beaches near Bundaberg, however, the last known nest was back in 1996. They are identifiable by their soft leathery shell which is unlike other hard-shelled sea turtles. Instead of scales they have 5 distinct ridges covered in a soft leathery skin.

Turtle ID
Prev
Which Turtles Nest on the GC?
Next