Marine turtles are a highly migratory species with strong site fidelity to breeding and foraging grounds.  They utilise both marine and terrestrial environments to fulfill different stages of their life cycle. Turtle populations are very vulnerable to disruption due to the specifics of their breeding cycles:

These traits mean that marine turtles are highly vulnerable to human impacts and are very slow to recover from population decline.

The rest of this lesson provides a overview into the life cycle of marine turtles, much of the information was taken from ‘Recovery Plan for Marine Turtles in Australia, Commonwealth of Australia 2017’ , please follow the link for further information.

Although marine turtles spend the majority of their lives in the ocean, adult female marine turtles come ashore to lay eggs in the sand above the high tide line. Females lay on average, two to six clutches per season. In between laying clutches, turtles remain close to the nesting beaches before returning to their foraging grounds at the end of the season.

Successful incubation requires marine turtle eggs to be buried in well-ventilated, humid, sandy sites that are not subjected to flooding or erosion, and have a temperature range that stays within 25-35⁰C for the duration of incubation. Marine turtles have temperature dependent sex determination. This means that the temperature during incubation determines the sex of hatchlings, with higher temperatures producing predominantly females. We can assume that hatchlings in the Southern ranges, such as on the Gold Coast beaches will be predominantly male, especially at the beginning and end of the season, with some females being produced in the middle.

Hatchlings emerge from the nest and orient towards the sea using the low light horizon. After entering the water, hatchlings use a combination of natural cues (such as wave direction, current, and magnetic fields) to navigate and travel into deeper offshore waters. Crawling out of the nest, crossing the beach and swimming away is thought to imprint the hatchlings with the cues that allow individuals to return to their natal region for breeding as adults.

Hatchlings rely on the internalised yolk sac for energy during the first few days of life. Once they reach the open ocean they will begin to forage for food in the upper water column favouring things such as sea weed and small marine invertebrates. 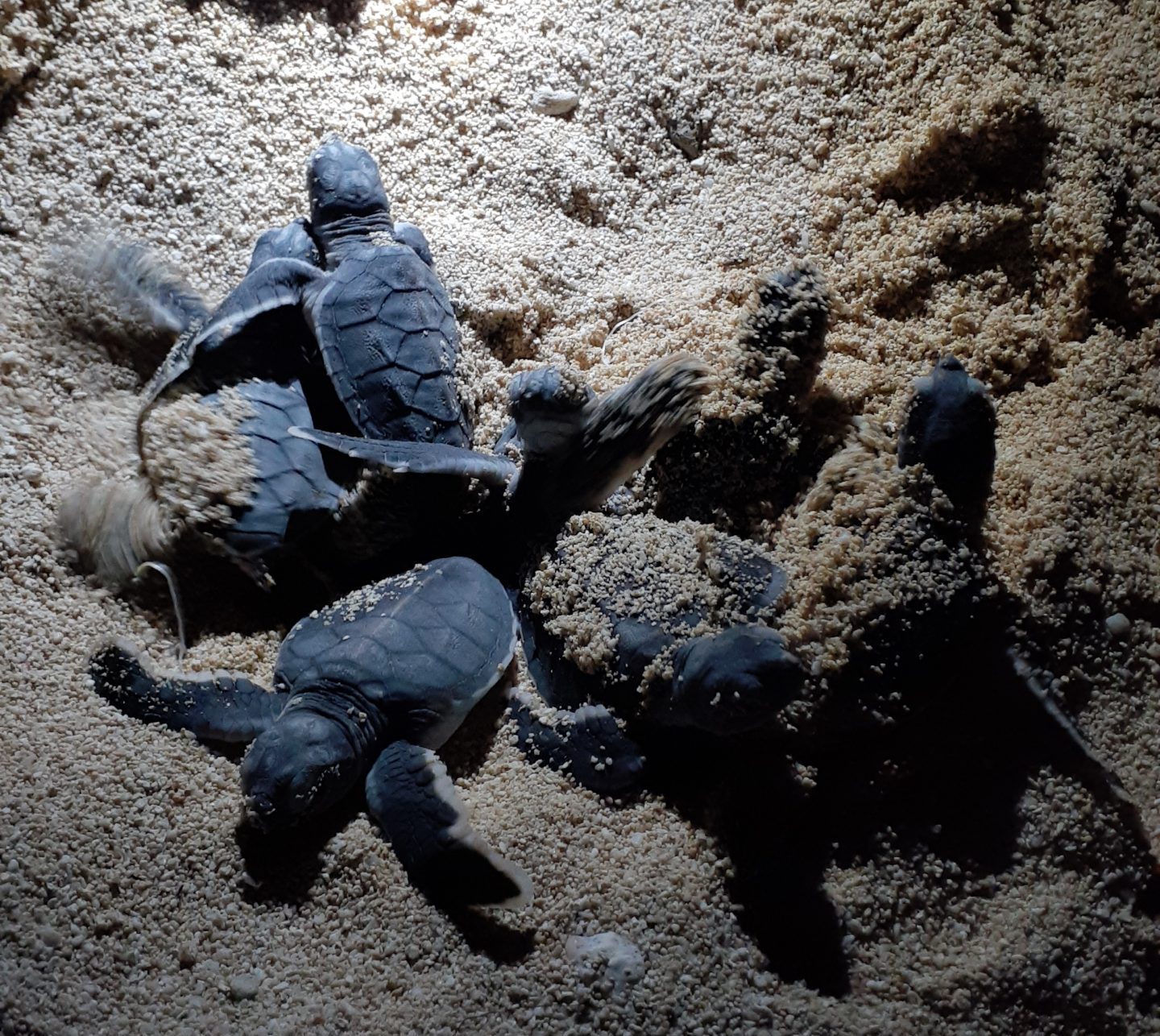 After the hatchling leaves its natal beach and swims offshore it enters it’s next life-stage referred to as the post-hatchling or pelagic juvenile stage. In general, hatchlings disperse into oceanic currents such as the East Atlantic Current (EAC), which offer a relative amount of safety to the small reptiles. The turtles will stay in these pelagic environments for some years until they grow into juveniles and are large enough to settle in coastal feeding habitats.

After leaving the oceanic habitat, juvenile turtles (i.e. not sexually mature) generally ‘recruit’ or take up residency in continental shelf waters where they inhabit sub-tidal and intertidal coral and rocky reefs and seagrass meadows and deeper soft-bottomed habitats. Prime turtle feeding areas include the southern end of the Moreton Bay Marine Park, the Broadwater and along man made seawalls and training walls found at our creek entrances.