Seagrasses are found across the world, from the tropics (hot) to the arctic (freezing). Australia has approximately 51,000 km2 of seagrass meadows and Antarctica is the only continent without seagrasses. Segrasses inhabit bays, estuaries and coastal waters from the shallow intertidal areas to 60m, however most species are found in the inshore areas between 0 – 25m. 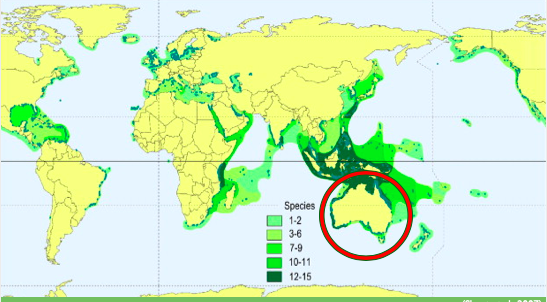 Look at the distribution map shown above (adapted from Short et al., 2007):

Shades of green on this map indicate the number of species reported for a given area. The darker shades of green indicate more species are present. While most coastal regions are dominated by one or a few seagrass species, regions in the tropical waters of the Indian and western Pacific oceans have the highest seagrass diversity, with as many as 15 species growing together. As you can see from the red circle, Australia has some of the highest diversity in the world, with large areas along Queensland’s coastline.

Seagrasses are widespread in the Broadwater and estuarine areas around the Gold Coast, and their growth depends on a combination of natural and human factors. Natural factors include water movement, wind, light, overall water quality, and grazing by dugongs and turtles. Human disturbances such as boat moorings, anchorages, and damage from boat propellers can also affect patterns of seagrass distribution. Slow growing seagrass species are found in areas with relatively low disturbance, while species that grow rapidly and produce large numbers of seed are more often found in highly disturbed areas.

Please click complete when you have finished this lesson!