Unfortunately platypus now face many threats thanks to the impacts of European settlement. Please raise awareness of these threats and do your best to help our platypus populations.

Creek erosion is a big problem for platypus, as well as other native species, and can be caused by multiple factors. 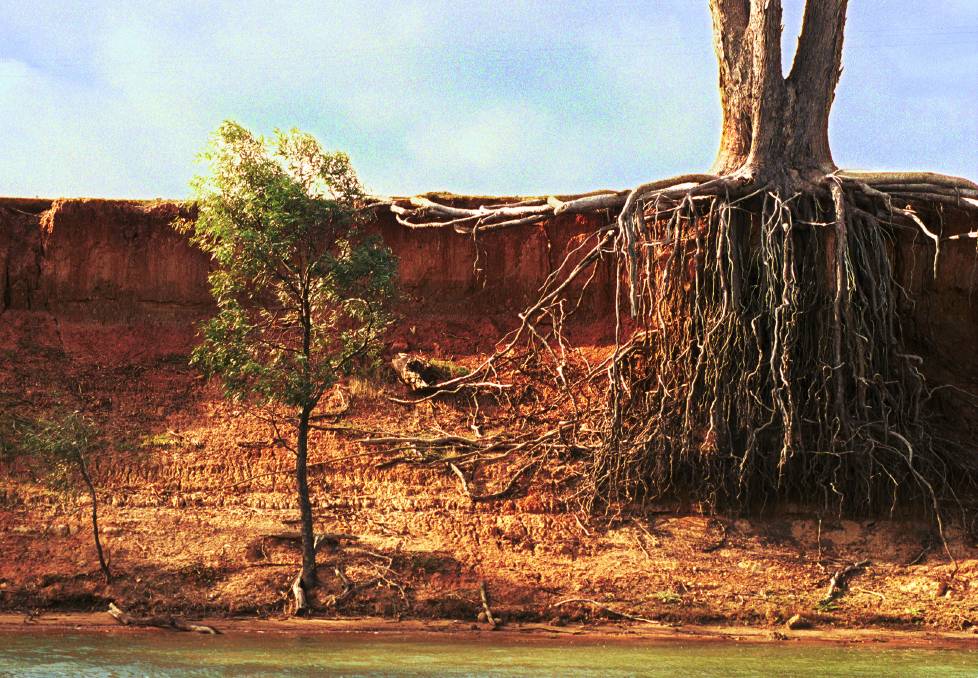 Farming is a big contributor to platypus habitat destruction, particularly cattle farming. Large scale land clearance can have devastating effects on the river banks themselves, particularly with the removal of trees. Tree roots are vital for river bank stabilisation and the tree structure provides protection and shade. With no canopy protection the light floods in and weeds take over the area causing further degradation to the bank due to shallow roots, tuber roots and annual die off. These growth factors leave empty space beneath the surface of the soil which eventually collapse under the pressure of sun-baking and water flow. 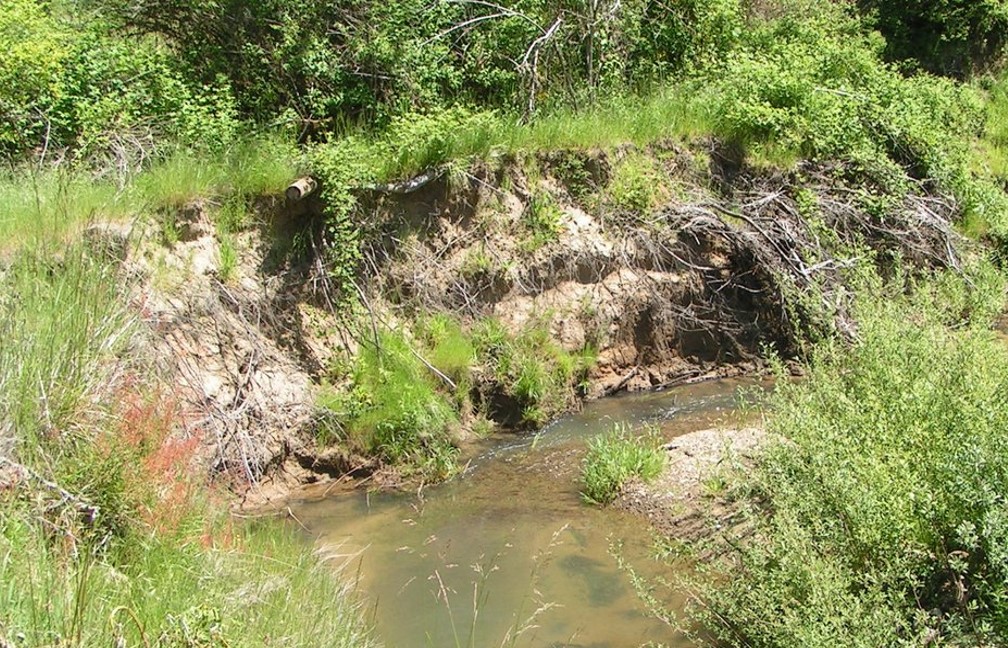 The cattle themselves also directly degrade the creek  banks. When they go down to the water for a drink, they destroy the bank, dragging mud, plants and sediment down with them which fills in platypus pools that were once deep and fresh. This extra sediment covers up all the rocks on the bottom of the creek and along with the destruction of over-hanging vegetation and the addition of cow manure pollution, the water becomes uninhabitable  for most macroinvertebrates.

With no protection, no food and nowhere to make a burrow, platypus populations are displaced or perish.

Domestic land clearing is also a big contributor to creek erosion. Those who live along waterways should ensure that they plant plenty of stable rooted, locally native vegetation along the water’s edge to maintain water quality and help platypus and other creek dwellers. 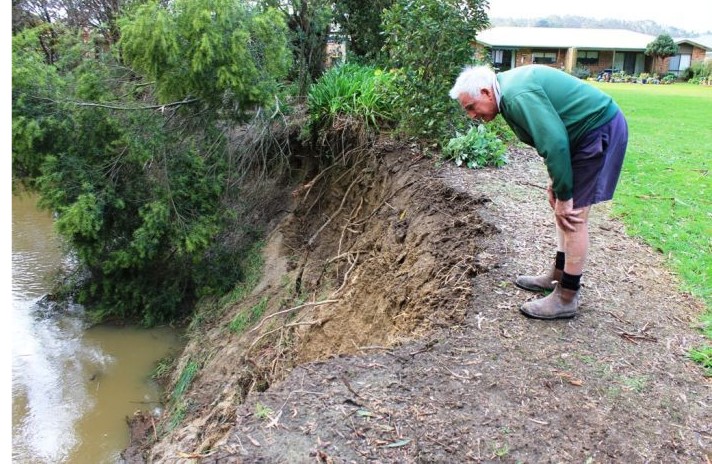 Four-wheel driving is also another big contributor to creek erosion. Four-wheel driving is another big contributor to creek erosion. Many of these drivers appreciate the environment and are unaware of the damage they are doing. Driving on established tracks has a small environmental impact, but driving off-track or up the creek itself causes significant environmental damage. Off-track driving uproots and destroys vegetation, displaces rocks, destabilises soil and injures or kills wildlife by crushing platypus burrows, beaching aquatic life and running-over snakes and turtle. 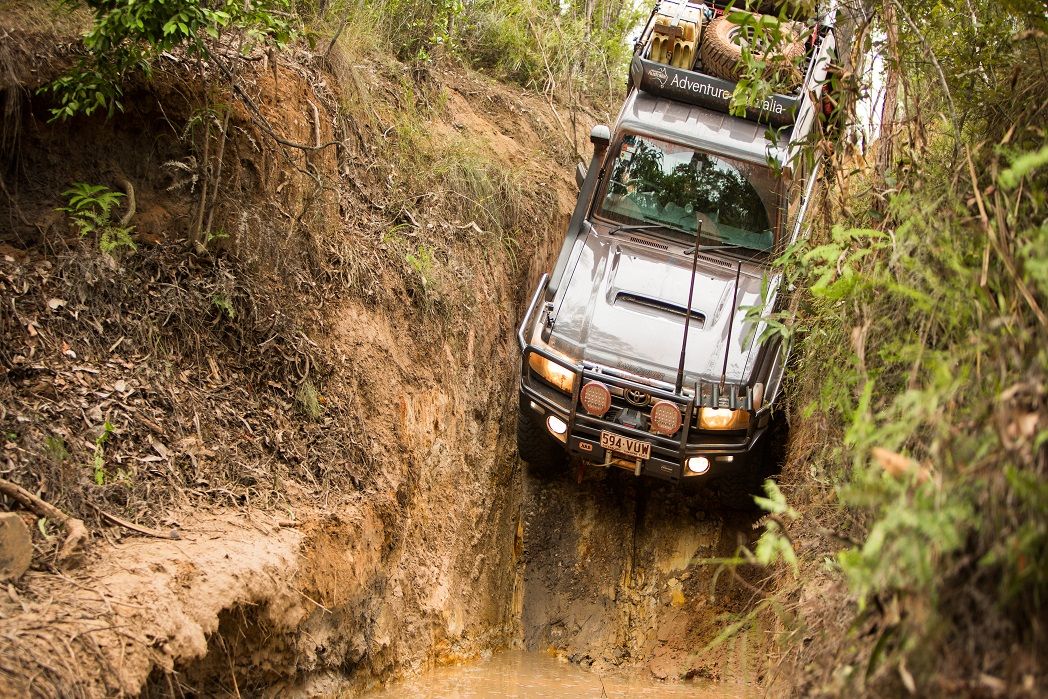 Pollution can be in the form or chemicals, rubbish, increased salinity, increased sediment levels, and many other factors.

The reason platypus are so susceptible to water pollution is down to their food, macroinvertebrates. Many macroinvertebrates are very sensitive to pollution and are unable to survive in compromised waters. The lack of food displaces platypus populations and they are forced to seek new territory. If they are unsuccessful, they will starve.

Invasive predators are problematic for all of Australia’s native species. Prior to European settlement, the Australian ecosystem was in perfect balance with only a few apex predators at the top of the food chain whose numbers remained relatively small, as they should do. The introduction of cats and foxes has been catastrophic for native species, which don’t have the evolutionary, ingrained understanding to avoid these creatures effectively. They have bred extensively in the wild and cats alone (both feral and pets) are responsible for killing over 2 billion native animals each year. Platypus are at great risk from foxes and cats who prey on them when they are on land or in their burrows. Pet dogs are also a risk to platypus and must be kept under control around waterways.

Although we have already mentioned that rubbish is a form or waterway pollution, we must also draw attention to the direct impact specific items can have on individual platypus. Circular items such as the plastic ring from bottle-tops, rubber-bands, hair-bobbles and wrist-bands can injure and kill platypus and other animals if carelessly discarded. Make sure you always cut them before you throw them away. 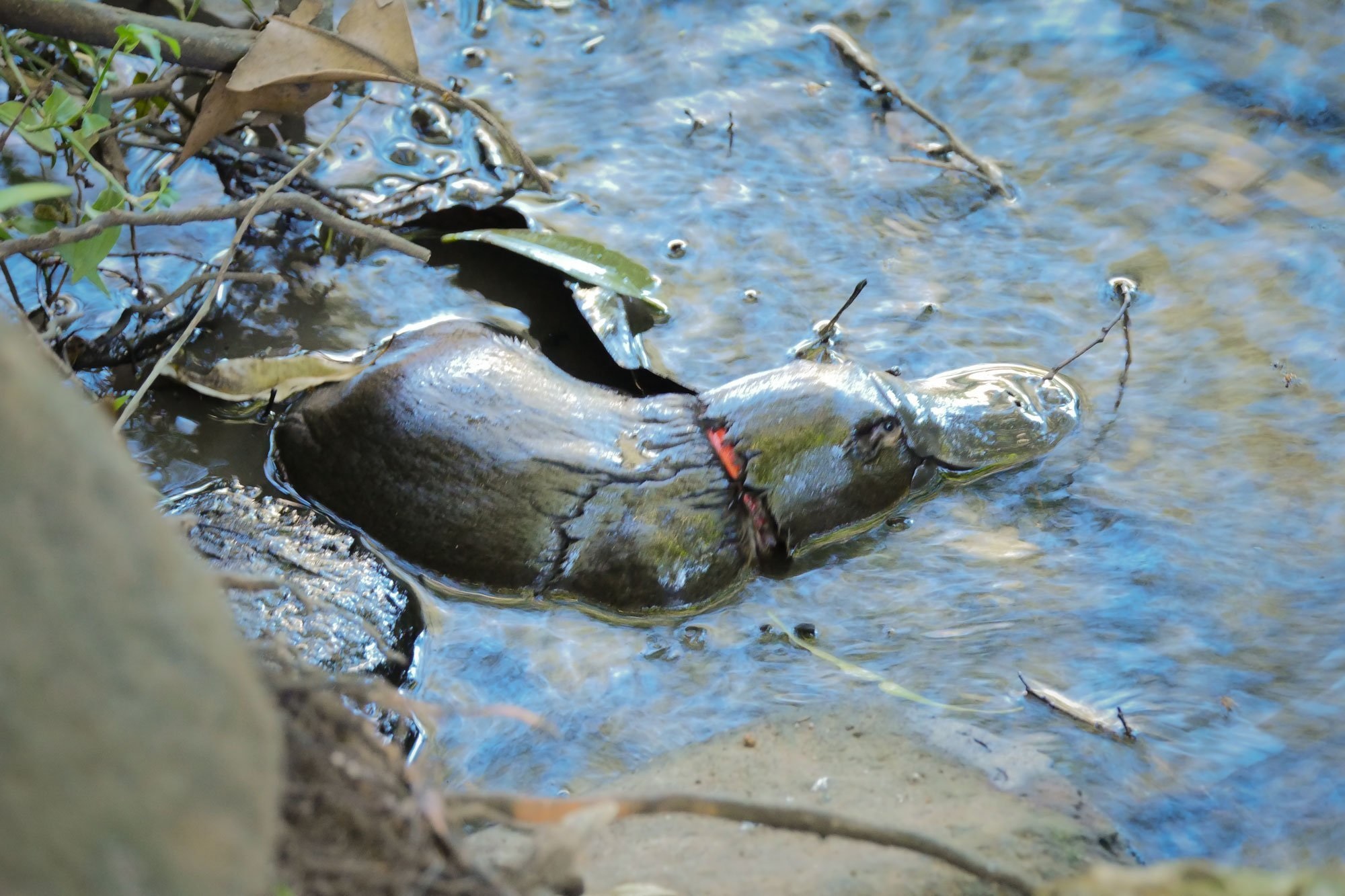 Discarded fishing line, balloons, wire, bottles, plastic bags… the list goes on. Put rubbish in the bin, and if you see rubbish, please collect it as long as it’s safe to do so. 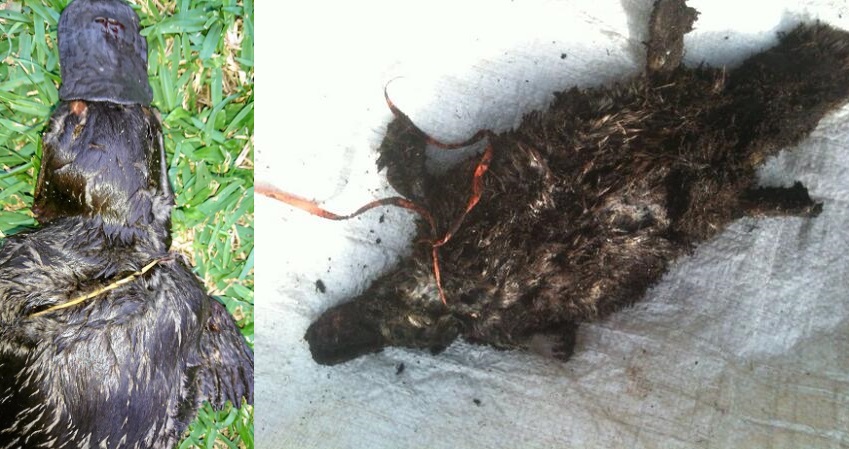 Opera-house style yabby nets are one of the most upsetting threats platypus face today, as the deaths they cause are completely preventable. These yabby nets present significant danger to many creatures such as turtles and rakali, but they are particularly dangerous for platypus. 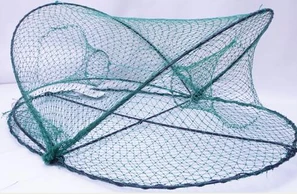 The reason platypus are particularly vulnerable to opera-house nets is down to the way they hunt. Remember they swim with their eyes shut and sense electro-sensory waves given off by macroinvertebrates, like yabbies! Platypus will head for the yabbies, unaware that there is a net around them. Due to the design of the trap they are able to easily swim into the net but find it very difficult to get out. Platypus can easily swim into an empty net by accident as well. Turtles and other victims may be able to work out how to exit the net and return to the surface before they run our of air (although it is unlikely), but platypus can’t survive for very long under water. So they don’t have time to work out how to escape before they perish.

This style of net is banned in Victoria. They are nearly banned in NSW, however they are widely available here in QLD and the QLD Government has not responded to persistent petitions to ban them.

If you want to catch some yabbies, you can use other nets, as demonstrated below. Not only have they been proven more effective, they don’t present any danger to platypus and other air-breathing swimmers. 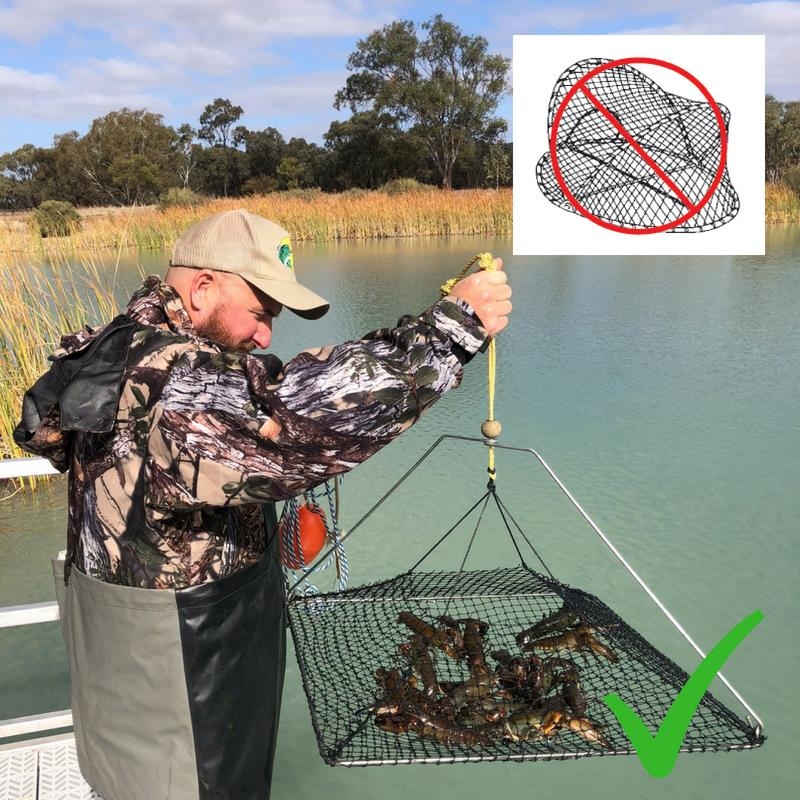 There are some native predators that platypus need to watch our for as well, although not many. Their biggest natural predators are bird of prey. Another natural predator is the quoll, but their populations are so reduced now that the threat to platypus is very low. Snakes will also make a meal of a platypus if they find one. Thick riparian vegetation surrounding waterways serves to protect platypus from predators and historically, there seemed to have been no negative impacts to platypus populations from natural predators. The food chain was simply kept in balance. 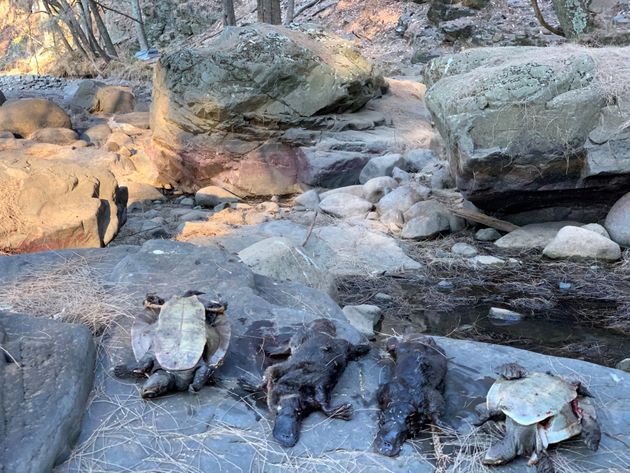 When faced with extreme drought, platypus are pretty helpless and unfortunately the drought of 2019/2020 claimed many victims. Once waterways dry up platypus have no food and simply perish along with other animals.  Platypus can also be vulnerable to the effects of flash flooding. Fast waters carry large debris that can sweep platypus away and rip apart the river banks, destroying and flooding platypus burrows. Although floods and drought are natural phenomenons, they are occurring far to regularly in recent years. The waterways have little time to repair between weather events which means that the rate of damage increases and the effects of these events are far from natural.

Now, this has been quite a depressing section of the course (for me too!) but don’t worry, all hope is not lost! We’re now going to move on to some more positive material. We’ll tell you about all the wonderful work that is being done to try and save this iconic species and how you can get involved!